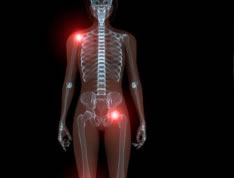 Rheumatoid Arthritis is characterized by pain, stiffness, and swelling of the joints, and most often affects smaller joints such as those of the wrist, hands, and feet. Because RA is an autoimmune disease, the inflammation caused by the immune system attacking the body can also affect the surrounding organs, like the eyes, lungs, and blood vessels.

Who Gets Rheumatoid Arthritis

Rheumatoid Arthritis is diagnosed in people all over the world. However, as it is with other autoimmune disorders, it does appear that those with RA may be genetically predisposed for the disease to begin with. Women are twice as likely as men to develop Rheumatoid Arthritis. It is theorized that certain environmental factors can contribute to the onset of RA, including cigarette smoke, viruses, bacteria, air pollution, insecticides, and silica dust.

Rheumatoid Arthritis along with other autoimmune diseases, is an enigma in traditional and conventional medicine circles. Research also shows that those affected with RA are more likely to have a deficiency in Vitamin D, but it is unclear as to whether the deficiency is a cause or a result of the disease itself.

If you experience any stiffness or pain in your joints, it is recommended that you seek medical treatment as soon as possible. The inflammation that RA causes, if left unchecked, can severely damage the joints. According to the Arthritis Foundation, joint damage cannot be reversed, and the earlier you diagnose and begin treatment for Rheumatoid Arthritis, the more likely you are to avoid irreversible, systemic damage.

Symptoms of RA can often be confused with the symptoms of other diseases and conditions. Systemic lupus erythematosus, psoriatic arthritis, and fibromyalgia exhibit similar symptoms, but the treatment for each condition can vary and a misdiagnosis of RA could mean that you are not getting the proper treatment for your condition. It is important to receive a proper diagnosis so that you can begin treatment early on, avoiding the irreversible joint damage that can severely affect your quality of life.

Holistic Healthcare for a Systemic Disease

RA is a systemic disease, meaning it affects the entire body, but primarily it is an attack on tissue surrounding the joints. The immune system attacks this tissue, causing severe inflammation and pain that only worsens over time. If left untreated, RA can lead to immobility, as the pain and stiffness becomes unbearable.

Treating a systemic disease effectively should involve the treatment of the body as a whole. Holistic and natural healthcare is just that--an alternative approach that considers the integrity of the immune system as a vital component of one’s overall health. With an autoimmune disease, most mainstream treatments do not address the root of the problem at hand, and instead, only address the symptoms to provide temporary relief for the patients.

At LifeWorks Wellness Center, we understand that autoimmune diseases affect the health of the entire body. We have developed treatments for many patients that provide treatment on a holistic level. Rather than treat the symptoms, we provide patients with an individually tailored treatment that works with the body to provide long-term relief.

Meet With An AutoImmune Disease Specialist

LifeWorks Wellness Center is considered one of Florida’s top autoimmune disease clinics. We can provide you with the proper diagnosis and treatment to address your Rheumatoid Arthritis using a holistic approach that has proven successful with many autoimmune disease patients. We have effectively treated joint pain and swelling using our alternative treatments and we would love to help you, also.

To schedule an appointment with an autoimmune disease specialist, or for more information about our services, please contact our New Patient Coordinator at (727)466-6789 or submit an online web form with your request. We look forward to working with you so you can finally be on your way to good health.