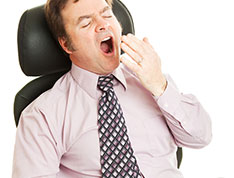 Chronic fatigue syndrome (CFS) is recognized by The Centers for Disease Control and Prevention as a defined clinical condition, and thousands of people are treated for it every year.

The main symptom of CFS is constant exhaustion which cannot be remedied with sleep. Constant exhaustion does not a guarantee a diagnosis of CFS however since extreme fatigue can also be a symptom of many other underlying chronic health conditions, such as Lyme disease, mono and lupus. For that reason, it is very important to seek a practitioner who can correctly diagnose the cause of your fatigue.

Why Do I Feel So Fatigued?

Lyme disease – is very effective at mimicking other chronic conditions including CFS, because extreme fatigue is usually a major symptom of the disease. The exhaustion usually manifests within a few days or weeks of the person contracting the disease and it will not cease until the person is correctly diagnosed.

Hypothyroidism – includes Hashimoto’s disease and Graves’ disease.An under-production of thyroid hormones will slow down the body’s metabolism, which can lead to a feeling of constant fatigue and unexplained weight-gain.

Mononucleosis - Mono is caused by the Epstein-Barr virus which is contracted by exposure to a cough or sneeze, by kissing, or by sharing food or drinks with someone who has mono. It usually takes four to eight weeks for symptoms to develop and constant fatigue is common in people with this virus.

Multiple Sclerosis - (MS) is a disease of the central nervous system, which affects the brain and spinal cord. Fatigue referred to as “MS lassitude” is common in many people with this disease and it can be very debilitating.

Hormone Imbalance – occurs most often in women who are in perimenopause and menopause. When the hormones are not being produced in the right quantities, one of the first clues is that the woman feels constantly fatigued.

Lupus - is a chronic autoimmune disease, meaning that the body's immune system attacks its own tissues and organs. Inflammation caused by lupus can affect many different body systems and can cause severe exhaustion to occur.

Fibromyalgia – occurs when a person has broken or poor quality sleep which results in chronic exhaustion. Infections have been identified as a potential cause of fibromyalgia and physical or emotional trauma can also be pre-cursors to the condition.

Adrenal Fatigue – occurs when the adrenal glands are not functioning as well as they should which can lead to general tiredness and lethargy and in severe cases it can be extremely debilitating.

Anemia - can cause exhaustion. Women are particularly prone to this especially during their menstrual years. Red blood cells which carry oxygen to tissues and organs can become depleted during blood loss and this can lead to feelings of exhaustion.

The reasons for always feeling tired can be many and varied. Because chronic fatigue can be a component of other conditions, it is very important to have the correct testing to establish which condition(s) you really have. Only then can correct therapy begin.

At LifeWorks Wellness Center, when a patient complains of constant tiredness and exhaustion a functional evaluation will be performed by the practitioner, in order to establish the root cause(s) of the exhaustion.

If chronic fatigue is diagnosed, either as a stand-alone condition or as a symptom of another illness, a personalized treatment program will be written for the patient which will address all aspects of their health.

Lifeworks Wellness Center is long recognized as one of the top natural health clinics in the US.

At our Natural medicine clinic we have been offering treatment for chronic fatigue syndrome for quite some time and many of our patients have regained their energy.

Since so few doctors offer natural chronic fatigue therapy, many of our patients travel from all over the world because they simply can’t find clinics offering this treatment where they live.

We have helped many patients regain their health and we would love to help you, too.

To become a patient, or for more information, feel free to call our New Patient Coordinator at (727) 466-6789 or simply submit an online web form with your request.

Epstein-Barr virus (EBV) is also known as human herpes virus 4 and it is one of the most common of human viruses. Most people in the U.S. become infected with the Epstein-Barr virus early in their lives, but most people are not aware of it. By age 35, EBV antibodies are present in most people, which indicates previous infection.