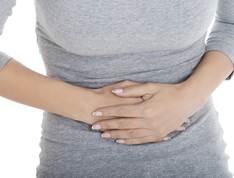 Crohn’s is a disease of the immune system, and is classified medically as an autoimmune disorder, which means the body is producing antibodies that work against itself. Crohn's disease is most often found in a section of the small intestine called the ileum, but Crohn's can happen anywhere in the GI tract from the mouth to the anus. Crohn’s disease can affect anyone at any age but most typically it is first diagnosed in people in their teens and twenties.

Crohn’s disease, like IBS, celiac disease and ulcerative colitis, is classified as a gastrointestinal disorder and has symptoms in common with the other diseases, such as cramping, blood in the stool and weight loss.

Named for gastroenterologist, Burrill Bernard Crohn, who worked at both Mount Sinai hospital and in private practice at a time when physicians believed the only disease of the small intestine was tuberculosis. Crohn questioned that theory when he met with a chronically sick 17-year old boy and in 1932, he wrote a ground-breaking paper describing the disease which now bears his name.

The most common areas affected by Crohn's disease are the last part of the small intestine called the ileum and the colon. Crohn's disease symptoms can range from mild to severe and may develop gradually or come on suddenly, without warning, and may include:

Crohn’s disease is widely believed to be an autoimmune disease, which means the body’s immune system is literally attacking itself, in this case the GI tract. Cells invade the intestines and produce inflammation which results in ulceration and thickening of the intestinal wall, which in turn leads to painful cramps.

Unfortunately, in conventional medicine no one knows exactly what causes Crohn's, just that something in your body causes your immune system to overreact. Various stimuli may cause Crohn's disease, affecting individuals differently. For instance, it might be a kind of bacteria, something in your own intestines, or even your family history. All of these are quickly and non-invasively evaluated during an initial visit to LifeWorks Wellness Center.

In fact, scientists now believe it is a combination of all these factors. If you have Crohn’s disease, you may have inherited a unique gene in your immune system. Then, something happened that triggered that gene, causing the overreaction, which then caused inflammation in your intestines.

Since many gastrointestinal disorders have very similar symptoms, it is important that an accurate Crohn’s disease diagnosis is made. At an initial consultation, the practitioner may ask questions about family history of the disease and will probably conduct a physical exam. If the patient presents reporting bloody diarrhea, fever and tenderness in the abdomen then lab tests will almost certainly be ordered. To make a Crohn’s disease diagnosis, tests may include:

When a patient presents with Crohn’s disease, LifeWorks Wellness Center will offer natural Crohn’s diseases treatment, geared toward identifying and correcting the cause(s) of the problem. This is preferable for many patients who do not want to face a lifetime of prescription medication to handle their condition and are seeking natural Crohn’s disease treatment. This treatment will be tailored specifically to each individual patient and will involve testing to see which nutritional supplements they will respond best to in order to reestablish the integrity of the lining of the intestinal tract, deal with microbial overgrowth issues and balance the autoimmune effect.

Lifeworks Wellness Center is long recognized as one of the foremost natural health clinics in the US. At our Clearwater, Florida alternative medicine office we have been offering Crohn’s disease treatment for a long time and many of our patients have benefitted from it. Our patients fly in from all over the world because they simply can’t find clinics offering solutions to their Crohn’s disease and natural medicine for Crohn’s disease where they live.

We have helped many patients regain their health and we would love to help you, too. To become a patient, or for more information, feel free to call our New Patient Coordinator at (727) 466-6789 or simply submit an online web form with your request.