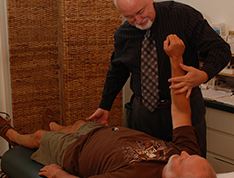 The word Kinesiology means Science of Movement which looks at the whole person (not just at selected parts). Kinesiology looks at all types of stresses which can cause disease. They include emotional, nutritional, structural and electrical stress.

The basis of Kinesiology is that the body is like an electrical piece of equipment, which is controlled by an incredibly complex computer, namely the brain. The brain is continually in communication with each of the 639 muscles in the body.

If a muscle is electrically in balance, it is possible to measure a constant electrical signal from the brain to that muscle and back again, much the same as two faxes 'talking' to each other.

However, when the body is overstressed (through a chemical, emotional, structural or electrical cause), the electrical signals in one or more muscles go weak. It is like a fuse in your fusebox blowing. The body figures that it is better to blow a fuse than the whole thing.

This is the basis of muscle testing, which is the main tool used in kinesiology. Once the weakness is located through muscle testing, the kinesiologist then 'talks' to the body. The body can answer "yes" or "no" with a strong or weak muscle. At our Clearwater clinic, we use muscle testing to ask a patient's body any of the following questions:

Kinesiology is one of the diagnostic tools we use at LifeWorks and it can help you. Call 727-466-6789 for an appointment.

Homeopathy, also known as homeopathic medicine, is a whole medical system that was developed in Germany more than 200 years ago and has been practiced in the United States since the early 19th century. Homeopathy is used for wellness and prevention and to treat many diseases and conditions. The term homeopathy comes from the Greek words homeo, meaning similar, and...

At our Clearwater clinic we can assist the body in defending itself against cancer and other chronic diseases through nutritional support and immune enhancement. Dr. Springer is a Doctor of Naturopathic Medicine, and expert in endocrinology (the hormone system), as well as gastroenterology (the digestive system). He has an in-depth knowledge of the right herbs...