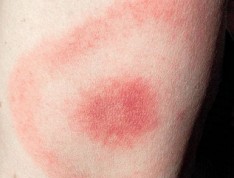 Lyme disease has several co-infections.  These are:

The Centers for Disease Control & Prevention (CDC) states that Babesiosis is caused by microscopic parasites that infect red blood cells and are spread by certain ticks. In the U.S., tickborne transmission primarily occurs in parts of the Northeast and upper Midwest and usually peaks during the warm months.

According to the Centers for Disease Control & Prevention (CDC), Ehrlichiosis is primarily reported from the southeastern and south-central United States. These areas report the distribution of the lone star tick (Amblyomma americanum), which is associated with transmission of both E. chaffeensis and E. ewingii. Three states (Oklahoma, Missouri, Arkansas) account for 35% of all reported E. chaffeensis infections. Since 2009, over 115 cases of ehrlichiosis caused by E. muris eauclairensis have been identiﬁed in patients in the Upper Midwest.

According to the Centers for Disease Control & Prevention (CDC), Anaplasmosis is most frequently reported from the Upper Midwest and northeastern areas of the United States . Due to the common vector, co-infection with A. phagocytophilum and B. burgdorferi, Babesia microti, or Powassan virus is possible; illness may be marked by a more severe course or incomplete response to treatment.

A. phagocytophilumis usually transmitted by the bite of an infected tick, however it may also be associated with blood transfusions.

The Centers for Disease Control & Prevention (CDC) reports that people can get Cat Scratch Disease (CSD) from the scratches of domestic or feral cats, particularly kittens. Infected fleas can carry Bartonella bacteria on cats. These bacteria can be transmitted from a cat to a person during a scratch. CSD occurs worldwide, wherever cats live. Stray cats may be more likely than pets to carry Bartonella. In the U.S., most cases of CSD occur in the fall and winter.

Trench fever is transmitted by the human body louse. Due to its association with body louse infestations, trench fever is most commonly associated with homelessness or areas of high population density and poor sanitation. Trench fever occurs worldwide.

Carrión’s disease, previously known as bartonellosis, is transmitted by infected sand flies (genus Lutzomyia). It's important to note that Carrión’s disease only occurs in the Andes Mountains at 3,000 to 10,000 ft. in elevation in western South America, including Peru, Colombia, and Ecuador. Most cases are reported in Peru.

Rocky Mountain spotted fever (RMSF) is a bacterial disease spread through the bite on an infected tick including the American Dog Tick, the Rocky Mountain Wood Tick and the Brown Dog Tick. RMSF can be deadly if not treated early with the right antibiotic. Symptoms of RMSF include fever, headache, and rash.

Q fever is caused by the Coxiella burnetii bacteria. It infects animals, such as cattle, goats, and sheep. C. burnetii bacteria are found in feces, urine, birth products (i.e. placenta, amniotic fluid), and milk of infected animals. It is important to note that people can get infected by breathing in dust that has been contaminated by infected animal feces, urine, milk, and birth products. Veterinarians, dairy workers, livestock farmers and meat processing plant workers have an increased risk of exposure to the C. burnetii bacteria. Some people never get sick; however, those who do usually develop flu-like symptoms including fever, chills, fatigue, and muscle pain.

Toxoplasmosis is an infection caused by the Toxoplasma gondii parasite. The Toxoplasma parasite can remain for a long time in humans (and other animals), possibly even for a lifetime. However, very few people have symptoms if they are infected as the immune system in a healthy person usually keeps the parasite from causing illness. Pregnant women and individuals who have compromised immune systems should be cautious; for them, a Toxoplasma infection could cause serious health problems.

Where to find Treatment for Lyme Disease

LifeWorks Wellness Center is long recognized as one of the foremost natural health clinics in the US. We have been offering treatment for Lyme Disease for a long time and many of our patients have benefited from it. Patients fly in from all over the world because they simply can’t find clinics offering Lyme Disease treatments and natural medicine for Lyme Disease where they live.  We test for Lyme and all its co-infections.

We have helped many patients regain their health and we would love to help you, too. For more information or to schedule an appointment, please call (727) 466 - 6789.