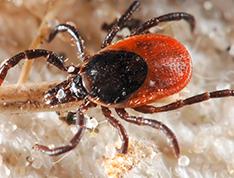 Lyme disease is the most common tick-borne illness in North America and Europe and is caused by the bacterium Borrelia burgdorferi. Deer ticks typically carry the bacteria, which they spread to humans while feeding on their blood, but other insects including mosquitoes are also implicated.

Some people will experience a rash in the shape of a bull’s-eye around the site of the tick bite, while others who have been bitten never see a rash at all. About 25% of people will experience flu-like symptoms which they usually do not associate with being bitten. So, with no clear indicators that a tick bite has occurred, most people go untreated until more serious symptoms begin to prevail.

However, other Lyme Disease symptoms may be present and can include:

Considered one of the top Lyme Disease Clinics in the nation, we frequently have patients fly in from around the world with a myriad of conditions. Some of these patients are seeking expert diagnosis and treatment for Lyme Disease and others for unexplained, unresolved health issues. Many patients are startled to discover their poor health is a result of having Lyme Disease.

With over 15 years of treating Lyme Disease, Dr. David Minkoff is considered a world-renowned Lyme Disease expert and is routinely interviewed by the media and asked to speak at international Lyme Disease Conferences to discuss the current state of Lyme Disease, his breakthrough treatment protocols and patient success stories. He has developed a uniquely effective, multi-protocol program for treating stubborn Lyme Disease infections, while also simultaneously strengthening and rebuilding the patient's health and immunity.

If you have been to other doctors and are not happy with the Lyme disease treatment you are receiving or if you have a stubborn health condition you feel may be attributed to Lyme disease, you owe it to yourself and your family to get a Lyme disease test to confirm a diagnosis.

Please watch the patient videos below and read some of the testimonials further down the page to see how many patients were suffering due to lack of proper Lyme treatment and how their lives were transformed after proper diagnosis and effective Lyme disease treatment.  Contact us at 727-466-6789 or make a request online.

Nothing says it better than our wonderful patients who are willing to share their stories about their treatment and recovery from Lyme Disease. Please be sure to also check out our Lyme Disease Treatment Testimonials and hundreds of patient reviews poosted on Facebook!

If you or someone you love has Lyme Disease and are seeking effective treatment options, please contact us at 727-466-6789 or contact us online.

What is Lyme Disease

Lyme disease is a condition that is spread by deer ticks, and anyone who is bitten by a deer tick has the potential of developing Lyme disease. It’s been known since 1975, when children who lived around or played in wooded areas...

Lyme disease often presents a spectrum of symptoms that are often overlooked as Lyme related symptoms. Patient may not be presenting with the hallmark Lyme rash that develops after a tick or mosquito bite and often don’t recall being bitten, contributing to a high rate of Lyme misdiagnosis...

Lyme disease is a condition that is spread by deer ticks and in some cases mosquitoes, and anyone who is bitten by a deer tick has the potential of developing Lyme disease. Several treatments are available, with varying levels of efficacy...

Lyme disease was first reported in the United States in the town of Old Lyme, Connecticut, in 1977 when children who lived around or played in wooded areas came down with pains, aches, fever, and a pervasive feeling of illness...

Lyme Disease in a Toxic World

I Knew I Had Lyme*

Giving Up Was Not An Option

When the cells of the body have been injured, such as with trauma or toxin overload or even cancer, they may lose their ability to generate proper energy levels to maintain their health. When this occurs they will swell and heal slowly or not at all. The result may be chronic swelling, or chronic...

Detox, Pain Relief, Cell-Rejuvenation and much more. Pain is a message from our body. The tissue cries out for energy flow, in the form of magnetic fields. The reason that Pulsed Magnetic Field (PMF) therapy works so effectively is because it supports the metabolism and increases the blood flow throughout the whole body. Red blood...

Lyme Disease in the News

Avril Lavigne's New Song About Lyme
Singer/song writer, Avril Lavigne has released her first new song in about 5 years and it's about her struggle with Lyme Disease.

Doctors had initially told Jackie Dube, that her symptoms were psychosomatic. After years of hearing that, but dealing with my eyes swollen shut, a dislocated jaw and shoulder, fistulas in my thighs, I was finally tested for Lyme and was positive.

East Asian Tick Makes it to the US

People in the United States are already aware of the dangers of getting bitten by a tick that carries Lyme disease. Recently a new tick danger arrived on the scene. A native of Eastern Asia, the bush tick or longhorn tick has recently been found on livestock in NJ.

British billionaire John Caudwell, founder of Phones 4U, recently went public with the devastating discovery that his entire family—himself included—has been diagnosed with the masquerading Lyme disease....

In April of 2015, Avril Lavigne revealed to People magazine that she had been diagnosed with a chronic form of Lyme disease. Avril dealt with inexplicable symptoms for months until finally being correctly diagnosed and put on a path to recovery. Her publicized experience with Lyme helps to raise awareness of the chronic disease that continues to affect thousands, perhaps millions, every year.

Yolanda Foster, prominent celebrity on the reality show Real Housewives of Beverly Hills, was diagnosed with Lyme disease in 2012. Until this year, the diagnoses of her two children Bella and Anwar Hadid had been kept from the public eye.

Tommy Hilfiger--famous American fashion designer and founder of the popular menswear brand Tommy Hilfiger Corporation—is no longer the only Hilfiger standing in the “lyme-light”. Tommy Hilfiger’s daughter Ally Hilfiger has recently gone public with her excruciating battle with Lyme disease.

Cases of Lyme disease are really on the increase throughout the US and 25% of all new cases reported are children. Lyme disease in children is most common in boys aged 5-9 years old...

Historically, Lyme disease outbreaks had thought to have been contained in the northeastern part of the US, but it is now recognized that Lyme disease in Florida is becoming a real problem...

Lyme disease in women can be very unpleasant, especially if it is not diagnosed correctly at an early stage. Women who believe they may have been infected by the bacteria genusBorreila from a deer tick or mosquito bite should seek medical help immediately, especially if symptoms develop...

Lyme disease is an infectious disease caused by three species of bacteria transmitted by the deer tick and quite possibly by mosquitoes, too. The bacteria belong to the genusBorreila and hence the disease is often identified as Lyme Borreliosis...