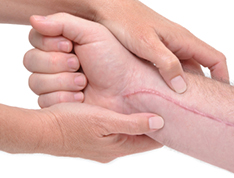 What is Neural Therapy?

Neural therapy is a medical technique that was developed by two German doctors in the late 1940’s and early 1950’s. What the doctors noticed was that sometimes when a treatment was given to a patient in one area of the body, it had an effect in another area of the body. Since the doctors were also trained in acupuncture, they realized the body is made up of interconnecting pathways of nerve tissue.

What the doctors discovered was that if someone had an operation and there was scar tissue over say, the appendix area, this area would then cause a disturbance in the nerve flow through that area. This could lead to chronic hip pain, chronic knee pain, or a dysfunction in some area. Quite by accident, these doctors noticed that if a small amount of a local anesthetic was injected into the area of the scar, then the knee pain or hip pain would dissipate. They then went on to discover that other areas of the body could act as places where nerve flow was blocked. This could occur with tonsillectomy, root canal, dead teeth or even teeth that were pulled.

Using a technique called autonomic response testing, we are able to determine if the scar tissue areas in the body are actually blocking the regulation in the nervous system or not. When these areas are discovered they can be treated, which in many cases results in the return of normal function.

How valuable is Neural therapy?

Until the discovery of this method, people had no idea that various scars in parts of their body could cause blockage of the regulation of the nervous system. Even today, people are given various types of medications to handle chronic complaints that were really stemming from a blockage in their own system. When these are diagnosed and found, it can bring great relief to a person who has had a chronic medical problem. We have seen many cases at LifeWorks where episodes of high blood pressure, inability to sweat, obesity or chronic joint pain was a result of scars that were causing blocked regulation within the nervous system.

What does Neural therapy do?

How is Neural therapy administered?

The techniques are very simple and relatively painless. The first thing we do is to test the scars to see if they are showing abnormal responses, using autonomic reflex testing. If the scars are showing blockages, a small amount of local anesthetic is injected locally into the scar. Sometimes the injections have to be repeated, but usually one time solves the problem. Most scars can be done within a half hour appointment.

Anti-aging medicine is the application of medical technology for the early detection, prevention, treatment and reversal of the three age-related “Ds”-dysfunction, disorders and diseases. As an extension of preventive health care, anti-aging medicine it is the next great model of health care for the new millennium. According to the American Academy for Anti-Aging Medicine (A4M),...

According to the Centers for Disease Control (CDC, 2018), “One in two adults in the U.S. has a chronic disease, and one in four adults has two or more.” This means that half the U.S. population is suffering from chronic illness. If it wasn’t so prevalent in years past, why is chronic illness becoming such a huge problem today?