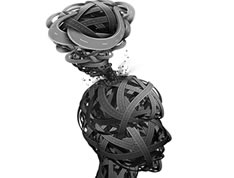 Do you know that feeling when you just can’t seem to think or figure out what to do next? Or you can’t remember a name, a phone number, or an address?

These are all symptoms of brain fog that can plague everyone once in awhile. But what happens when these symptoms become more frequent or start to occur daily? Let’s look at what brain fog is, its symptoms, causes, and how to treat it.

What Is Brain Fog?

Brain fog is the inability to think clearly or remember things that you would normally easily recall. Although there is no published definition of brain fog, people describe it as not being able to think clearly and access information that would normally be easy for them to recall. It’s a feeling of mental fog clouding a person’s ability to think and function making people feel detached, discouraged and sometimes even depressed. Brain fog is not yet acknowledged as a clinical diagnosis because it’s more of a subjective feeling rather than something easily tested for.

Although symptoms of brain fog can vary from person to person, they may include the following:

There are many causes of brain fog. The following is a list of the most common causes:

But I've never been bitten by a tick! That's what many patients say until we have their blood tested and it comes back positive. We uses a highly sensitive lab which often detects Lyme disease even after patients have been told they didn't have Lyme disease based on other tests.

Lyme disease can affect any organ of the body including the brain and central nervous system. If undiagnosed and not treated immediately, the bacterium spread throughout the body and often go into hiding in different areas, including the brain. Because lyme disease burrows into the brain to protect itself from being eradicated, brain cells produce cytokines which tell the immune system to send healing cells to the brain to help fight the infection. As the cells flood the brain, inflammation results, causing brain fog. In addition, another chemical present in brain infections called quinolinic acid contributes to brain fog.

Another reason Lyme disease causes brain fog is that it compromises the immune system and the body’s intestinal flora. Other infections take hold and cause the immune system to fight harder and harder to heal the body, causing inflammation throughout the body. There is also very often a buildup of toxins in the bloodstream due to mold or yeast overgrowth. Finally in some cases of untreated Lyme disease, infection may result in inflammation of the membranes surrounding the brain, called meningitis. All of these factors contribute to symptoms of brain fog.

Diagnosis and Treatment of Brain Fog

Because Lyme disease is so widespread and often misdiagnosed, every patient seen at Lifeworks Wellness Center is screened for the disease. If your Lyme test comes back negative, we will start looking at the other top causes of Brain Fog as listed above and will address each one as needed. We have an extremely high rate of success in treating Brain Fog. Once you know the cause, the cure is easy.

Lifeworks Wellness Center in Clearwater, FL is considered one of the top brain fog clinics in the nation. People come from all over the nation to be treated for debilitating brain fog and many patients fly in from around the world for treatment.

Get Rid of Brain Fog!

Don't let brain fog go on and on or assume it's normal or a natural part of aging. Left untreated the underying cause often gets worse and becomes more difficult to treat. Let us get to the bottom of it and nip it in the bud. There is help for those suffering from brain fog and for those suffering the ravages of Lyme disease.

For more information call us at our Clearwater clinic at 727-466-6789 or inquire online today.

I have suffered from illness chronically for over 5 years. Lyme disease and other symptoms of pain, brain fog, intestinal issues and so much more. Since coming to see Dr. Minkoff and starting treatment, it is like day and night.

After four and a half (12 in total) years of active symptoms due to Lyme disease and many coinfections – severe joint pain, fatigue, leaky gut, brain fog etc, I am finally regaining control of my life.

After about 4 treatments, I noticed the brain fog was pretty much gone.  I also noticed less exhaustion, but not a rush type energy, just a more natural level of energy.

I came to Lifeworks 1 month ago to get treatment for Lyme disease after years of chronic fatigue, brain fog and insomnia. Four weeks into treatment and I’m sleeping better than ever with much more energy.

I first went there as support for someone else. I had been diagnosed with Parkinson's by two neurologists. I had also endured chronic pain which had been attributed to depression. I had brain fog. My sleep was horrible...

Dr. Minkoff Talks About the Different Stages of Lyme Disease