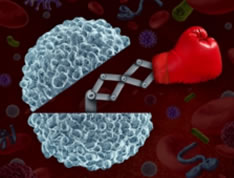 When a cell looks like a cell should, the immune system can recognize it as “safe” and will leave it alone. However, if a cell changes its shape and becomes unrecognizable, that’s when the immune system starts an all-out attack, seeing it as a threat to the body. Many things can cause a cell’s shape to change including exposure to toxins, drug use, smoking and gluten.

What are Autoimmune Diseases

How to Diagnose Autoimmune Disease

In conventional medicine, patients will usually undergo a series of tests to determine if they have an autoimmune disorder. Tests ordered may include:

At LifeWorks Wellness Center, when a patient presents with symptoms which may be linked to autoimmunity, a functional evaluation will be performed by the practitioner, to help to determine whether autoimmune disease is the cause.

In conventional medicine, many autoimmune diseases are treated with immunosuppressive medication to suppress the immune system. However, in doing so the patient can run a high risk of infection because the immune system can’t fight back, and so the body becomes vulnerable. Other treatments may include supplementation to replace a substance that the body lacks, such as thyroid hormone, vitamin B12, or insulin. A blood transfusion may be ordered if blood is affected and physical therapy may be required if the bones, joints, or muscles are affected.

At LifeWorks Wellness Center, the first step in treating autoimmune diseases is to immunize the patient to their own blood. In this a simple, effective procedure where a small amount of a patient’s blood is taken and mixed with a homeopathic remedy. This combination is then delivered back into the patient. This has the effect of re-programming the patient’s immune system and in many cases, begins the process of improving their symptoms toward recovery.

LifeWorks Wellness Center is considered by many to be Florida’s top autoimmune disease clinic and patients travel from all over the country to seek treatment. That is because the autoimmune disease treatment at this Tampa Bay clinic exceeds anything available to them where they live.

We have offered autoimmune disease treatment to many patients to help them regain their health and we would love to help you, too. To become a patient, or for more information, feel free to call our New Patient Coordinator at (727) 466-6789 or simply submit an online web form with your request.